Posted by Leah Kamel on September 13, 2019 under General

Everyone is familiar with goldfish. Most of us have had them in our classrooms, offices, or even homes. They’ve even inspired one of America’s favorite snacks, but how much do you really know about them?

Actually, there are a lot of misconceptions about goldfish. For example, they do not have a three second memory; it’s actually much closer to a three month span! They don’t swim in “schools” either; instead, a group of goldfish is called a “troubling”. There are so many cool facts about goldfish, but today we’ll be discussing our favorite one. 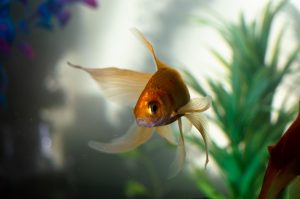 Goldfish are able to see both infrared and ultraviolet light!

Humans cannot see either. Here’s a quick description of both types of light:

Ultraviolet Light: a band of the electromagnetic spectrum. It is shorter than visible light (which is why we can’t see it) but longer than x-ray light. Ultraviolet light is emitted from the sun. Infrared Light: a type of light. It’s wave is longer than humans can see. We sense Infrared light as heat.

Goldfish have four types of cone cells in their eyes. These cone cells are sensitive to red, green, blue, and ultraviolet. Cone cells allow us to see color. Human eyes only have three types of cone cells, which means that we cannot see ultraviolet light. Because of these sight enhancements, goldfish are better able to sense both predators and prey through water’s reflections.